A decade of unbelievable hard work and dedication has resulted in the breathtaking Golob Landing development. The Port of Sunnyside has been working on the development of Golob Landing since 1999.

After 10 years, the industrial park officially opened in mid-2009 with its first tenants, Dr. Swofford and Dr. Halma’s medical clinic.

Golob Landing is a 106-acre property located near East Edison Road in Sunnyside. The cost of the project was more than $3 million, which included receiving funding from Yakima County and the state of Washington. The majority of the crucial industrial development project at $1.5 million, was funded by bonds.

Golob Landing was a mammoth project for the Port. Port officials developed roads, installed water, sewer, gas, electrical and street lights in the area. The Port also complimented the development with the addition of sidewalks.

Port officials are excited about the completion of Golob Landing. The development of the park will help generate business growth in the Sunnyside area. The development of the property will also help create additional income for the Port to help fund other projects that further enhance economic growth. The growth potential for business within Golob Landing will be attractive for companies and help generate new jobs that will stimulate the local economy. 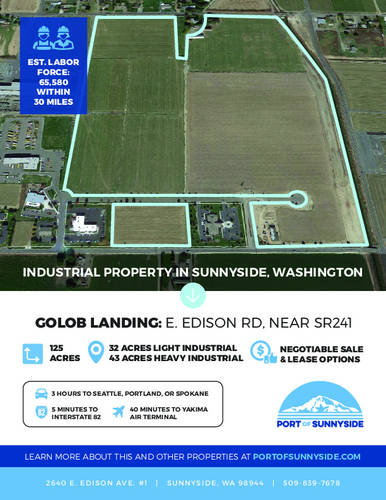